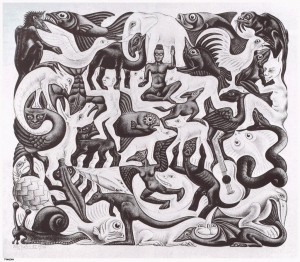 Rewilding as a Grand Projet – Reconsidering Navarro and Pereira
The article “Rewilding Abandoned Landscapes in Europe” (Navarro and Pereira (2012)) is a romantic and bold article, but is short on specifics and fails to engage with key issues. Monbiot, in Feral (2014), brings these ideas vividly to a wider audience.
It is romantic because the overarching vision of a unproductive and poor yielding farmland, abandoned by a younger generation, turned into thoughtfully reforested and biodiverse landscapes, is attractive to conservationists.
It also segues in with the views of Edward Wilson that we need to institute an age of restoration (Wilson, 1992), rather than restrict ourselves to salvaging what is left. This conservationist assertiveness is good – to make progress, optimism is required (Beever, 2000). Endlessly cataloguing the decline of the natural environment is not calculated to achieve the step change in human behaviour that is required to reverse the depredations of the 20th Century and return to the abundance of the 18th and 19th centuries.
However assertion is one thing, persuasion another. I would prefer to list the problems as shortly as possible and then discuss how I believe rewilding could be re-imagined as a grand projet for the 21st Century, and create an era where new ecological engineering (Jones, 2012) creates as many jobs, technologies and possibilities as the computer and oil economy did in the 20th.
Key issues I would argue the authors neglect are: (a) that while suggesting a continent wide initiative of enormous scope, it fails to address directly the issue of potential export of deforestation to other, possibly presently more biodiverse, areas (Day-Rubenstein et al, (2000)) (b) exporting agricultural production rather than reintroducing the principles of localism and locally sourced produce locks in high transport modes of life with high energy costs; (c) it is now established that conservation initiatives that do not address the economic needs of the local community will be politically unacceptable – this is no less true for failing European agricultural communities than for Amerindian tribes; (d) the vision of what is to be achieved is unclear – the subject article acknowledges that some agriculture can increase biodiversity (p902) and acknowledges the ongoing debate between land sharing and land sparing strategies (p909), but begs the question of the decision rule.
I do not argue for the status quo but to urge more imaginative solutions which can capture the hearts and minds of and create livelihoods for generations, and use Europe for empirically testing conservation strategies that could then be exported as a post industrial aspirational model for the rest of the world. The North cannot urge preservation on the rest of the world without reversing its own biological poverty – how can Europe tell Asia and Africa to retain top level predators as things stand?
Accordingly, any plan for rewilding Europe should be seen not as a return to any prelapsarian past, but an actively imagined biologically and culturally rich future. For example, rather than isolated national parks on watersheds and areas of low agricultural productivity, imagine a continent-wide ecosystem services and agriculture “infrastructure grid”, with equal tessellated human dominant and ecologically engineered areas – the “white squares” for humans, the “black” for a guided nature engineered for variety, with areas of cross over at the margin to ensure no human population is ever far from a wild they can interact with, and some that is structurally inaccessible.

Populations could migrate at the corners, rather than being hemmed in. In the black “squares”, roads and manmade structures would be buried and the landscape cultivated for maximal biodiversity. In the white, intensive agriculture and the urban and suburban would prevail. At the margin, the opportunities for interaction, some “grey” areas, would create the cultural biophilia without which conservation efforts are doomed. Protected areas would be linked, wildlife corridors created across the continent, and imagination and technology applied to the project. As with the enclosures, the building of the railways or sewage systems, it would be a difficult, transformative, common project. However, such a re-imagination of the landscape, accommodating agricultural requirements and ensuring that the wild was woven into the warp and weft of policy would supply millions of jobs in the creation and maintenance of such a grid and address the conservation difficulties of our time.
In trying to imagine how a new landscape could look, we should start to think creatively about features we take for granted – in particular familiar infrastructural constants that have become invisible with ubiquity – roads, railways and boundary features seem candidates for reimagination.
As a part of any project along the lines conceived above, imagine game stock free to roam across vast contiguous landscapes naturally channeled and contained to the “black” squares, roads and railways tunneled to permit free migrations of fauna – imagine the work entailed, and consequent positive economic impact of the geoengineering and infrastructure rebuild, and the cultural revival, to achieve such a new relationship between such radical new patterns of land usage and its stewards.
The containment of stock which drove the building of fences is hardly required when stock can be electronically tracked – the potential for a reconception of wild food is extraordinary, but would entail quite different frameworks for control of disease risk.
To rewild a tamed landscape a complete cultural shift in risk appetite and a drawing of the circle of care beyond the human to a wider definition of biological community is almost essential – perhaps a project of this scope is required to draw us into a bold and vivid future, and wean us off a constant yearning for a past we can never really grasp and where the desire for return bespeaks a misunderstanding of the enormous human drive to keep building futures and the potential that could be unleashed by trying to forge new understandings of what might be possible with a courageous imagination.

I wanted to know why we should save the tiger so I asked some conservationists.
Why Save the Tiger 050914